Bonding over medical diplomacy and peace, officials from Sri Lanka and the Sino Luso International Medical Forum struck common ground during the past several days of the 49th symposium series.

The Honorable Member of Parliament of Sri Lanka, Mr. Chanaka Denagama Vitharanage, commented, “We were able to listen carefully about the strong assets in this part of China and we will explore further collaborations with our doctors and universities in Sri Lanka with this forum and the new medical school here at MUST.” Mr. Vitharanage is also the Chairman of the “Pathuma” Foundation dedicated to raising money for educational and school supplies for impoverished children, particularly in the rural areas of Sri Lanka.

The Honorable Member of the Colombo Municipal Council, Ms. Nithya Senani Samaranayake, an international relations expert, said, “This has been an interesting and exciting to be in and I’ve learned a lot. We are working with the world movement of volunteerism in Sri Lanka, especially with education, so this will help us. We want to work more with this program here in Macao.” Ms. Samaranayake is also an advisor to the Chaya Foundation of Sri Lanka aiding children with autism and Down syndrome, as well as advising on women and children’s issues for the Colombo municipal government.

The two officials were also able to explain closer details of the events surrounding the recent April 21, 2019 tragic terrorist attacks in Colombo—and that initial reports of rumors that it led to a Buddhist backlash were utterly incorrect.

Ms. Nithya Senani Samaranayake commented, “We are a majority Buddhist country so we always want peace and harmony…. We live in peace with our Muslim and Christian neighbors. There really is not the sort of tensions certain press have suggested exist. We love our island.”

Mr. Chanaka Denagama Vitharanage commented, “We really have moved past this and are now in a much better place. We are seeing more infrastructure and close ties with China to help us with our port and tourism.”

Ms. Nithya Senani Samaranayake said, “Even today many young people don’t know too much about the conflict and how scary it was, so really the culture is changing on this. We never want war again.”

Regarding future medical collaborations with the new medical school at the Macau University of Science and Technology, Mr. Chanaka Denagama Vitharanage said, “When I return to Sri Lanka in the coming days I will gather more data on the specifics diseases that effect our country and our with our doctors to get back to you some ideas for how to go forward together.”

Ms. Nithya Senani Samaranayake said, “Our best universities will be happy to know about this as we have good medical schools that can participate.”

During their Macao visit, they attended several advanced Hazmat response seminars and scientific symposiums fo the Sino Luso International Medical Forum, and paid an official visit to the advanced simulation skills training laboratory of the new Faculty of Medicine at the Macau University of Science and Technology. 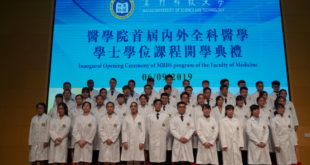 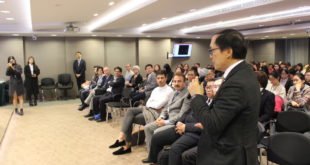