The Dawn of Ancient Khmer-Chinese Relations 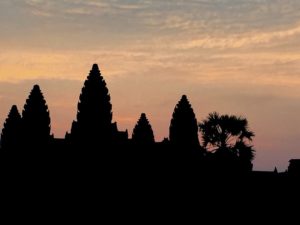 The jungles of Cambodia carry crucial clues for unlocking the mysteries of ancient Asia—particularly the relationships between early Khmer and Chinese civilizations.

The links between China and the great civilizations of the lower Mekong River such as the Khmer in Cambodia run long and deep.

This is tangible today to visitors with ruins in places like Angkor Wat featuring friezes depicting Chinese delegations. But the origins of Chinese and Khmer friendship are far older, buried in Chinese archives and countless sites throughout contemporary Cambodia.

Stretching over 4,345 km from the Tibetan Plateau through Yunnan province into modern day Myanmar, Laos, Thailand, Cambodia and Vietnam, the Mekong River has played a crucial role in the region’s history for millennia immemorial. So has the role of South China Sea with traders from the Yellow River and Yangtze River basins, Fujian, Guangdong, and Hainan sailing down the coast to the lower mouth of the Mekong Delta—and up it to crucial headwaters, tributaries and fresh water lakes of what is today Cambodia. 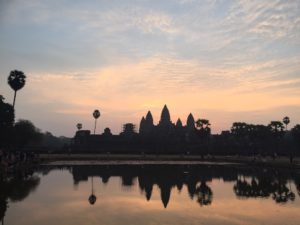 Two civilizations stand out in particular in what is now the Kingdom of Cambodia—the Funan and the Khmer Empire, the latter famously at Angkor Wat in northwestern Cambodia.

Lesser understood to outsiders is the Funan state, a series of kingdoms knit together in what is today modern Ta Keo province in southern Cambodia.

This pre-Angkor city reached its apex between the 5th and 8th centuries of the Common Era (C.E.). In fact, the Funan period ran from the 1st century to about the late 7th century C.E., when it was briefly supplanted then eventually absorbed into the burgeoning Khmer empire.

Whilst influenced from India with Hinduism and later Buddhism and the powerful Gupta Empire (320-550 C.E), it is Chinese characters that speak volumes, literally, about the early Funan world and how it sowed many of the seeds of ancient Southeast Asia.

Chinese history books captured the glory and globalism of this lost age of astonishing agriculture, architecture, culture, trade, music and diplomacy. Most of this past, however, has been lost to time and the jungle.

The Book of the Liang

According to the ancient Chinese history classic The Book of the Liang, two Chinese ambassadors named Chu-ying and K’ang-tai, “reached the court of Funan during the early days of the reign of Fan-hsun, probably shortly after 240 [C.E.].” This followed in the context of the Great Emperor Da Di of the Eastern Wu state sending diplomats to Funan in 228 C.E.

Upon their return, the two diplomats wrote extensive travelogues. Chu wrote A Record of Foreign Things in Funan, and Ka’ang produced the Story of Funan, Foreign Countries in the Times of the Wu Kingdom, the Customs of Funan and The Foreign Countries South of Jiaozhou. 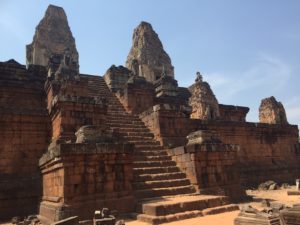 An excerpt from the latter book reads that the Funan King Fan-hsun, “built belvederes and pavilions, where was accustomed to take walks. Morning and noon, he gave three or four audiences. Foreigners and subjects offered him presents of bananas, sugar cane, turtles, and birds….”

The Chinese diplomat further observed that, “There are walled villages, palaces, and dwellings. They devote themselves to agriculture. They sow one year and harvest for three. Moreover, they like to engrave ornaments and chisel. Many of their eating utensils are silver. Taxes are paid in gold, silver, pearls, or perfumes. There are books and depositories of archives and other things.” 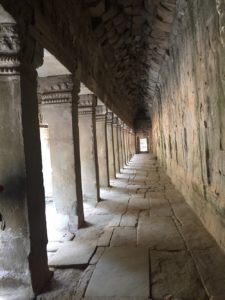 Another Chinese account penned by the end of the 3rd century C.E. recalled that, “In the sixth year of [Emperor] Chi Wu [243 C.E.], Fan-chan, the King of Funan, sent an envoy to the Emperor[of China] offering as a present some musicians and products of the country.”

He added that this had happened “169 years after‘the people of Kambuja’ paid homage to the Middle Kingdom.” This rough estimate of “169 years” prior to 243 puts the exchanges squarely inside China’s acclaimed Han Dynasty.

In the wake of the collapse of the four-hundred year old Han Dynasty, the Chinese state of the Eastern Wu emerged during the Three Kingdoms period with a capital near Nanjing. Lasting from roughly 220 to 280 C.E., the Eastern Wu laid down strong relations with its southern Cambodian brothers and sisters. 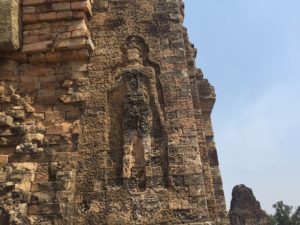 By the middle of the 3rd century C.E., Funan sent emissaries to China to regulate sea trade. In 263 C.E., more musicians were sent to China from Cambodia. By then, they had a sophisticated blend of localized versions of Indian influenced dances and rituals. The Chinese Emperor Jing was so impressed that he had a special Funan music school formed at his court near Nanjing so this tradition could be enjoyed. Such was the richness of this music that is persisted socially in Cambodia for centuries—in the 8th century during the Chinese Tang Dynasty, it travelled from China to Japan!

A century later, the powerful Funan King known as “Qiáochénrú” in Chinese sent domesticated elephants as gifts to Emperor Mu of the Jin Dynasty (344-361 C.E.).

Another Funan King named Jayavarm sent two Buddhist monks to the Chinese court of the Liang Dynasty by junk boat in 503 and 504. Known as Mandraseana and Sanghapala, they spent 16-years transcribing Sanskrit Buddhist texts into Chinese for the Liang court. In fact, Sanghapala died there in 1524.

Of course, for them, staying at the Liang court was more stable than staying in Funan—as rival state known as Chenle began rising to power against their king in 1514. Chinese scholars noted that by 690, the region of Funan and Chenle were factionalized. 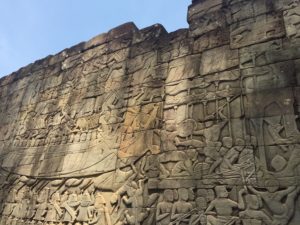 The famous Tang Dynasty Chinese monk Yijing who spent 25-years traveling in China, Southeast Asia sand India, noted Chenle on his 7th century map of Asia. Yijing observed that Chenle was vast—covering what is currently the Mekong basin up to southwest China.

Following the Chenle usurpation, the ruling family of the Funan escaped to central Java. Their ancestors formed the powerful Sailendra Dynasty—meaning “King of the Mountain.” They were the ones who would build the famous Borobudur Temple between 778 and 824 C.E.

A young man from this family later ascended the throne of the powerful Srivijya Dynasty. From this house, most royal lines on Java, Sumatra, and Malaysia to this day trace their ancestry to the ancient kings of Cambodia.

Part II The of Dawn of Ancient Khmer-Chinese Relations to follow….