Guangzhou based Harley Seyedin is a champion of peace. Indeed, The recent Oslo Business For Peace Awards 2017 found the deeds of Mr. Seyedin worthy of praise and encomiums of the highest order.

As President of the American Chamber of Commerce for South China and President of Allelon Energy Partners, he has labored for harmony in economy in China for over two decades.

As the highest award in the world for a person of business, Mr. Seyedin was joined in honor at the Oslo Business for Peace Awards 2017 with three other awardees this year for the proceedings in Oslo, Norway—fellow American Elon Musk, Durreen Shahnaz of Singapore, and Murad Al-Katib of Canada. 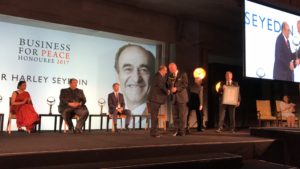 Awards are given according to individual business leaders who have taken risks to better bridge peace between their business and society—not for philanthropy or corporate social responsibility.

Harley and his fellow laureates were hand selected by the independent Award Committee of 2017 Nobel Laureates in Peace and Economics winners. They chose from a pool of nominees from over 40 countries that had been compiled buy the United Nations Global Compact (UNGC), the United Nations Development Program (UNDP), and the International Chamber of Commerce (ICC).

They were hosted by their Royal Highnesses, Crown Prince Haakon and Crown Princess Mette-Marit.

In his acceptance speech, Harley Seyedin said, “I am driven by a hope and need to improve my life so that my children will know a life more peaceful and full of opportunity than I had.”

He continued, “I am unaware of a purpose more universal or more uplifting than this, and believe that it is one shared by women and men around the world.”

He said, “I truly believe each and every one of us, whether in business, government, academia, or otherwise, can advance the agenda of peace and prosperity by ensuring that people impacted by our decisions are never short of the means to see their children grow up smarter, healthier and more hopeful than they did.” 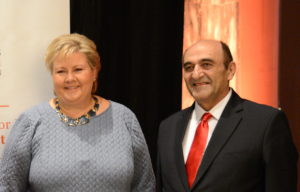 He said, “Fellow Honorees, I have read your collective accomplishments and I must say that I am truly humbled to be included among your ranks. In particular, two themes stand out in my mind. First, we were all born to humble, non-western families of modest means but have used that humility to our advantage—in my case, and would expect also in yours—as an intimate and powerful motivator to effect change in the world. Second, I observe that we have all deviated from the status quo in our efforts to construct a future in which we want to live. We have pursued unorthodox paths to pioneer new models for mindful economic growth.”

He continued, “Over the course of my career I have consistently sought out opportunities deemed by others to be commercially unviable or not sufficiently lucrative in which to attempt these innovations. I have been rewarded for these ventures not only by material success but also by the success of the indigenous communities that have become my partners. My legacy in business will be long-term sources of sustainable revenue for the local communities in which I have undertaken development projects.”

He further remarked, “I expect that you will have similar stories to share with me when we meet in Oslo, and eagerly anticipate hearing them. I have yet more road to walk ahead of me. New opportunities await in which I will apply the lessons I will surely learn from each and every one of you.”

He added, “To me this recognition represents our responsibility to those less fortunate in the world. To me it is nothing less than a moral imperative made tangible. I hope you feel the same way.”

This is the second major award for peace in business he has won. In 2013, he was given the U.S. Peace Through Commerce Medal—fewer than 20 Americans have ever been given one since Thomas Jefferson created them in 1790.