All that jazz in Havana 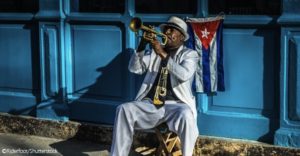 The 6th International Jazz Day is taking place on April 30, 2017 in Havana, Cuba.

Hosted with world jazz ambassador Herbie Hancock, the Havana concert takes place at the Teatro de La Habana Alicia Alonso under the auspices of the Ministry of Culture of Cuba, the Cuban Institute of Music and the Cuban National Commission for UNESCO.

According to UNESCO, “The concert will be live streamed by UNESCO and will feature an extraordinary array of artists from around the world paying tribute to the international art form of jazz.”

UNESCO Director-General Irina Bokova said,” UNESCO is proud to be associated once again with the Thelonious Monk Institute of Jazz, as well as with the Instituto Cubano de la Música, to raise the flag for jazz, for freedom, for creativity, for diversity and for unity. This year’s focus on Cuba is testament to the power of jazz to build bridges and join women and men together around shared values and aspirations.”

Week long jazz appreciation performances will take place across Havana starting April 24 leading up to the concert on the 30th.

Jazz vents also commence on April 30 across the world. So wherever you are that day, make sure to jazz things up.

For more information about the International Jazz Day 2017 live stream from Havana, Cuba: www.jazzday.com or www.unesco.org/jazzday.